Albums first dropped late last year as one of 2019’s many new arrivals. While I was charmed with its clear, album-focused vision, I found its many design issues held it back from becoming a compelling option. I did, however, note last year it was genuinely impressive the sheer number of improvements Albums received just three short months following its initial release. After all, if Albums’ developer, Adam Linder, could improve his app that much in just three months, I could only imagine what he’d accomplish if given a full year. Now—at the end of 2020—Albums is no longer a quaint novelty, but a feature-rich juggernaut and a must-buy for anyone that loves albums as an art form.

Albums today feels more like a “spiritual successor” to the initial version than a mere update. Last year, the app had just one primary view (the “album wall”). Stuck to the bottom of that wall was an unusual “My Library” button, which Albums’ treated as its dumping ground for all its other views, such as “Decades” and “Artists”. Today, that’s been completely scrapped and replaced with a sensible iOS tab bar. The album wall—which was the entire app when it was originally released—is now just a single tab view, leaving a tremendous swath of attention real estate to fill with new tab views.

The first of those new tabs is “Library”, which offers a traditional browsing experience like that of Picky and Dot Music with the standard suite of viewing options like “Artists”, “Albums”, “Playlists”, etc. You read that right, this single tab view effectively matches all functionality of entire other players on the market! To top it off, the discovery features like “browse albums by decade” that garnered praise last year also find their new home, here. This has the profound effect of elevating Albums beyond its old “focused, but single-purpose” player category like that of Jams on Toast and Longplay to the level of mature, broadly useful player like Marvis Pro while still maintaining its focus on records.

The next tab, “Insights”, is far and away my favorite view in the app. A suite of gorgeous discovery sections find their home here, such as the new “Diamonds in the Rough” section, which contains such collections as:

Another highlight is the “Over The Years” section, which uses your age to construct personalized throwback discovery collections like “High School” and “My Mid 20s”. There’s also “Anniversaries”, which surfaces albums in your library whose anniversary is this week. For example, at time of writing, ELO’s “Out of the Blue” celebrates its 43rd anniversary; I wouldn’t have known that otherwise, and it gives me a fun and topical reason to drop the album a relisten.

The last of the new tabs (not counting “Settings”) is “Stats”, which on the surface offers a birds-eye view of your library and listening statistics, much like those provided by PlayTally (which is again another example of Albums incorporating entire other apps’ feature sets into just a single view). You can either use the suite of pre-built listening metrics or create your own to see your “most played” producers, genres, recording labels, and more. It’s an unexpectedly fun time playing around with these different charts, and to top it off you can easily tap into any of their results to browse or play their items, making it yet another fantastic discovery feature in Albums.

There’s even more wonderful discovery possibilities to be found in the player itself. Upon scrolling down in the redesigned player view, three different tabbed views present themselves: “Track List”, “Credits”, and “Statistics”. Those familiar with my thoughts on Albums last year may remember I panned the credits feature, noting that I found its information uninspiring and not particularly useful. However, this year the credits feature received a complete rewrite and is now arguably Albums’ “kill feature”.

The best way to demonstrate this incredible new feature is to show you; I recently relistened to Beach House’s Bloom and popped into the “Credits” tab mid-listen for a quick browse. There, I tapped the album’s record label (Sub Pop) to see what other records in my collection were released on that label to spark ideas for what to listen to next. While scrolling through the rest of Bloom’s credits, I found the record was mastered by Joe LaPorta, and tapped his name to see what other records in my collection he’s mastered. Turns out, he not only mastered Fleet Foxes’ latest record, Shore, but also mastered one of my all-time favorites, Lord Huron’s Lonesome Dreams. While physical record linear notes are great, they simply cannot deliver this experience; in physical space, there’s no way I would have noticed and remembered that connection, but thanks to Albums I’m now aware of a mastering engineer whose work I tend to really enjoy and gives me ideas of where to search for new music in the future.

I’ve only begun to scratch the surface of the new discovery features available in Albums. Keeping with Albums’ new proficiency at integrating whole other apps’ feature sets, there’s a new Marvis Pro-inspired feature called “Quick Actions”. With it, users can create their own smart collections based on a myriad of customizable filters and sorting methods. Those “Quick Actions” can then be easily launched with Siri, the new “Quick Actions” widgets, or the new “Quick Actions” shelf that slides out from the top right of the tab bar. For example, I can easily make a “Quick Action” to see my personal 2020 favorites by adding a release year and a minimum play count filter. While not nearly as fully-featured as Marvis Pro’s “Sections”, more filtering and sorting options are sure to arrive with time.

That’s not to say Albums’ is fully rid of its shortcomings from last year; the redesign—while functionally a vast improvement—still leaves a lot to be desired visually. The player’s use of vanilla transparency in the background instead of translucency as suggested by iOS’s Human Interface Guidelines is a frustratingly bad call. The new “Immersive UI” feature that changes the app’s tint color based on the currently playing album’s art is a great idea in theory, but in practice is very hit and miss, oftentimes resulting in borderline unreadable text. While choosing accessible primary and secondary colors based off any given album art is a very tricky problem indeed, I’d argue if the results are this spotty it should have been left on the cutting board until the algorithm could be improved. Not to mention Albums’ new “floating” player view controls look and feel “off”, especially in comparison to Doppi’s similar but far superior implementation. However, I’m happy to say that despite these and other visual shortcomings, the tantalizing feature set Albums now boasts makes the vast majority of these issues very easy to overlook for the time being.

Last year, I closed my thoughts on Albums with an optimistic prediction that it had a bright future ahead of it, but even my high expectations were blown away by Albums this year. Its browsable credits list, human-centric suite of pre-built discovery collections, and sensible navigation structure make Albums stand among yet apart from iOS’s best. If you’re even passingly interested in albums as an art form, Albums is no longer a mere suggestion but nearly a requirement.

Albums’ widget support is world-class, featuring not one, not two, but three discrete widget collections, all with varying size and customization options. This pits Albums up against Marvis Pro and Soor for most comprehensive widget support. 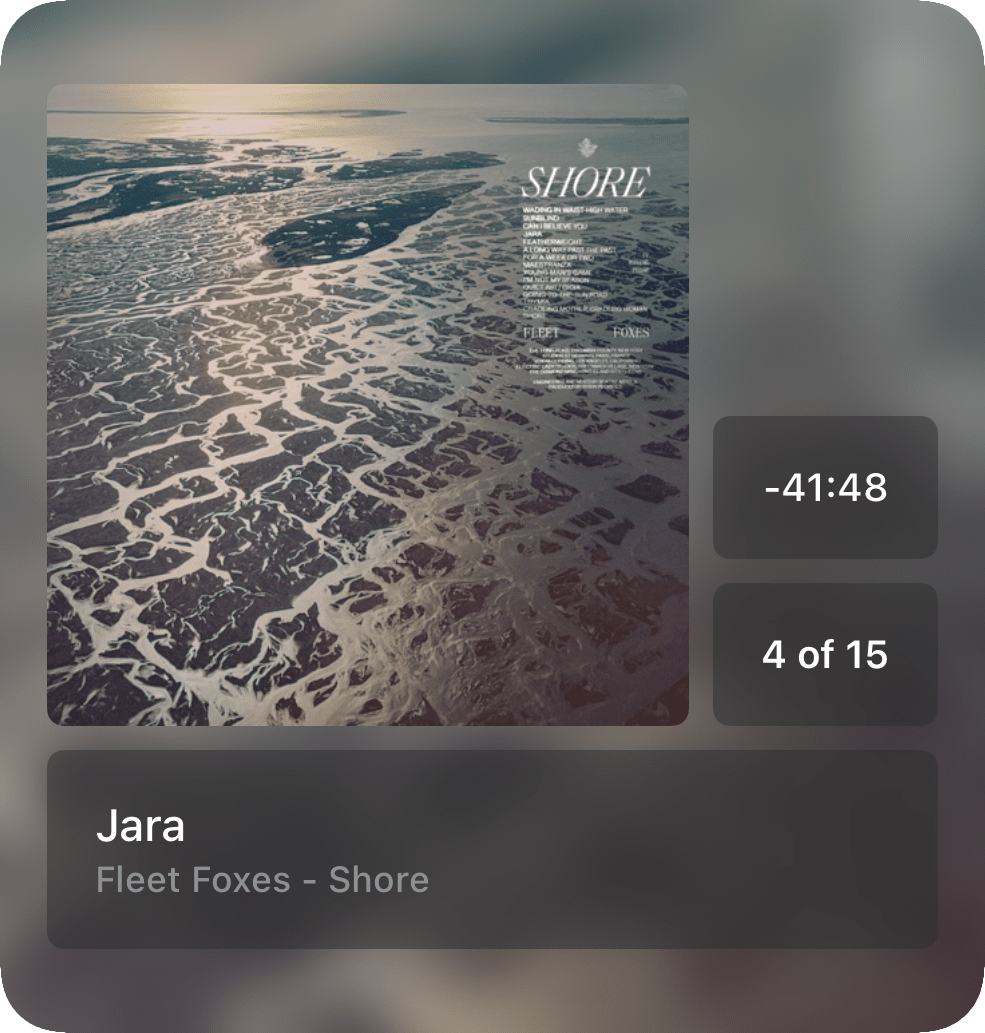 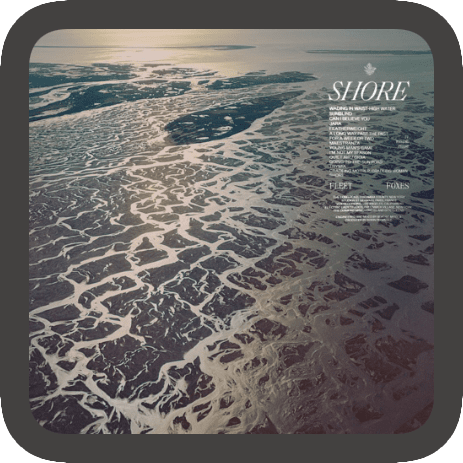 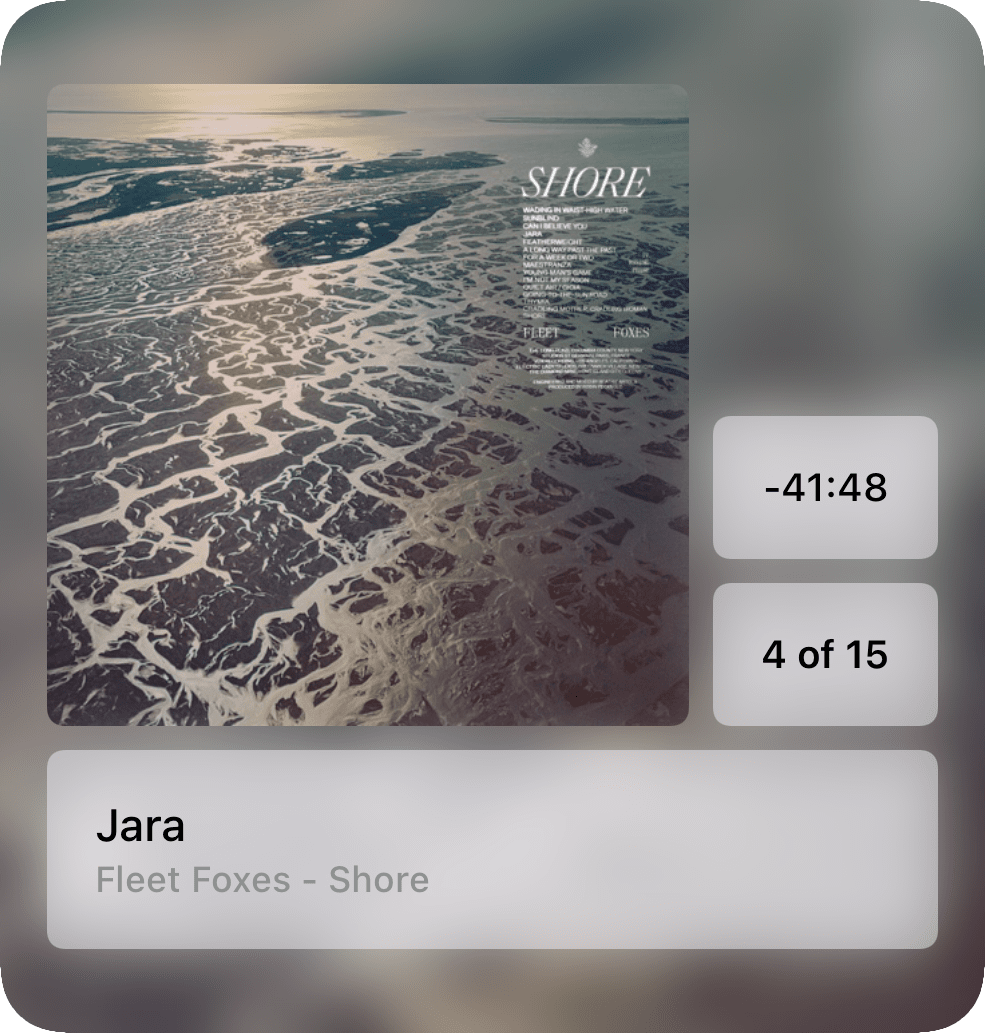 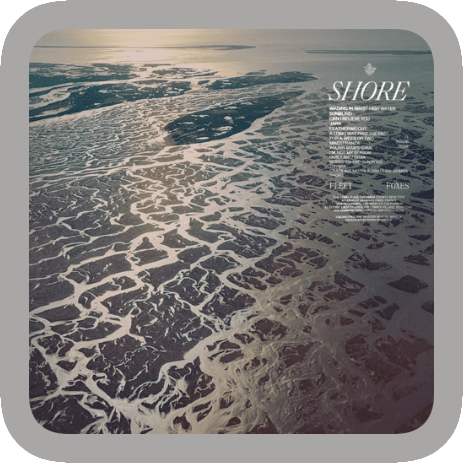 To start, there’s three “Now Playing” widgets, one for each of the three widget sizes. They all feature a visually pleasing translucency effect. It’s among the few “Now Playing” widgets available today that includes any kind of “realtime” information, in this case taking the form of a “time left” counter. 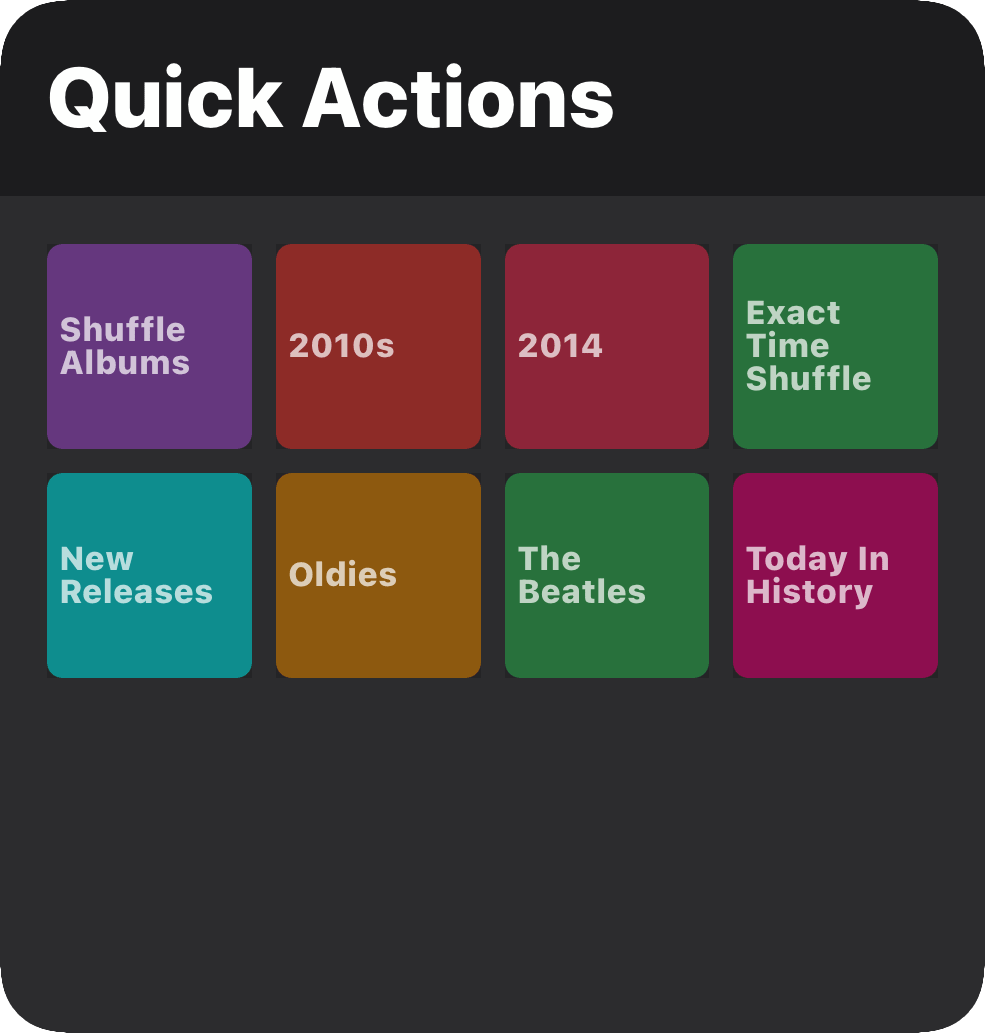 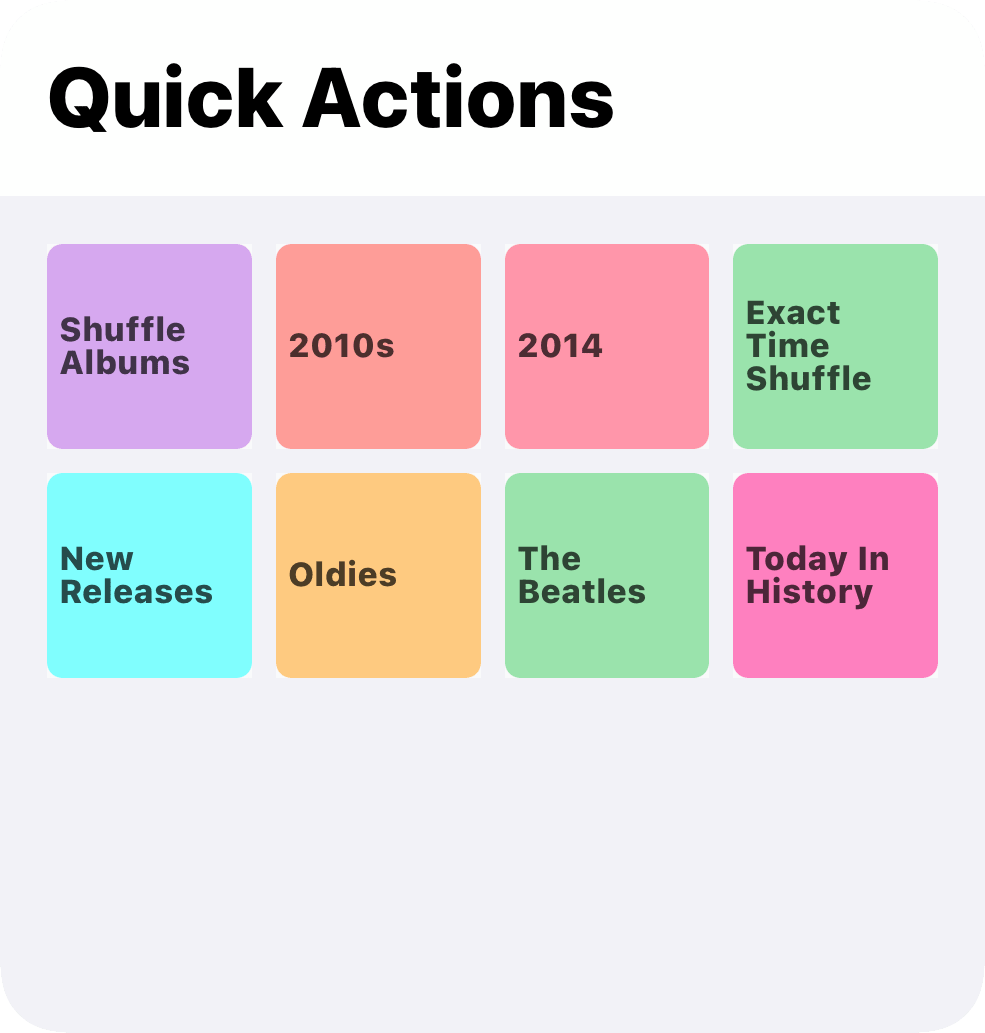 The next widget collection provided by Albums are “Quick Actions”, which display a simple button grid of all your custom actions. If you’re heavily invested in customization like I am or find yourself growing weary of the many taps it takes to get to a particular collection, these widgets are perfect for you. 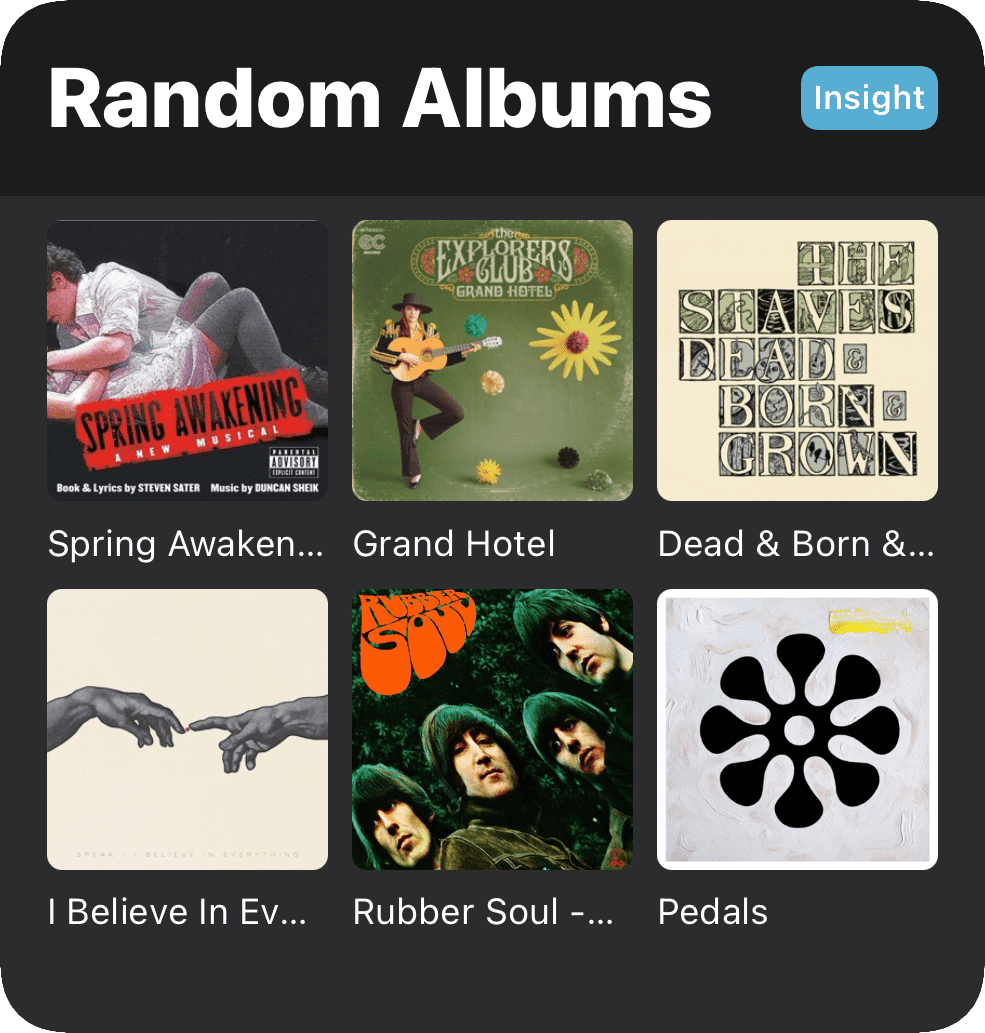 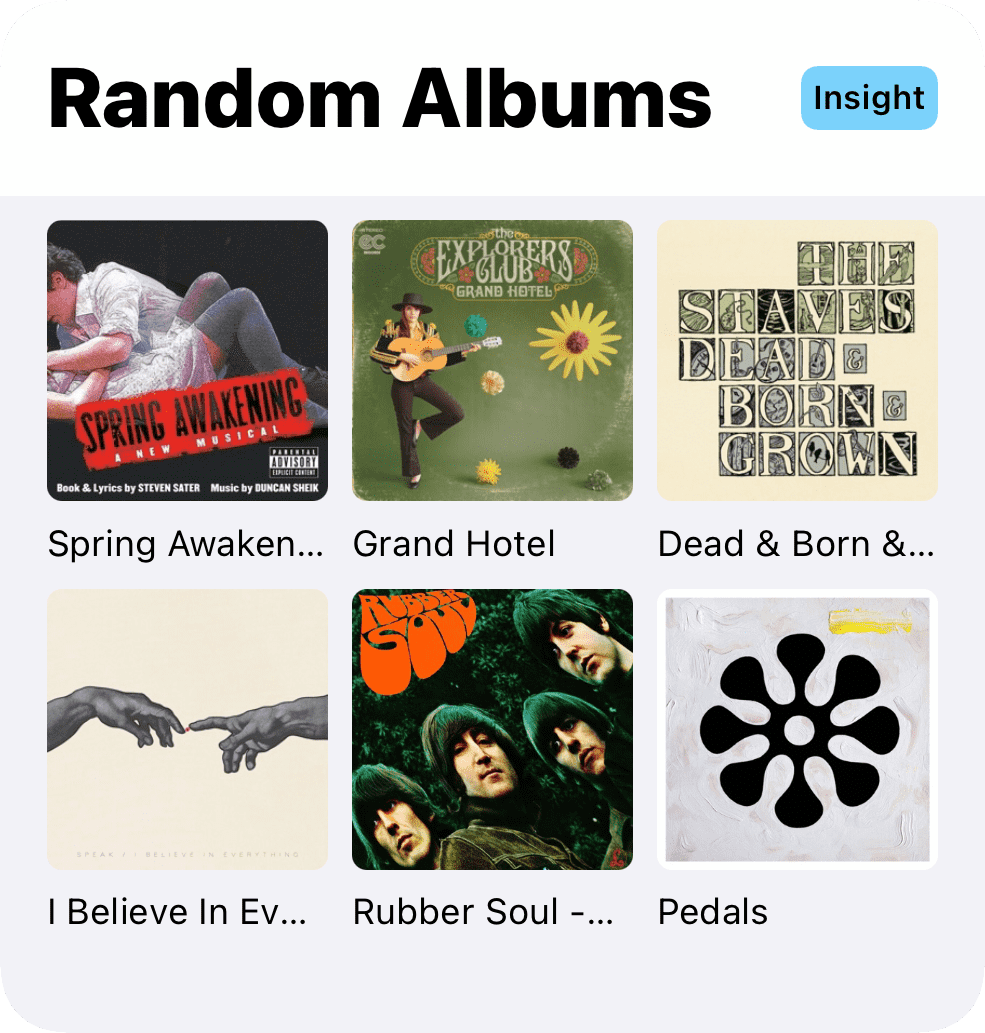